Our Associate Digital Editor Emily Achieng speaks to Kola Tubosun, whose poetry chapbook, Attempted Speech and Other Fatherhood Poems we have just published. Listen to Kola read some of the poems. 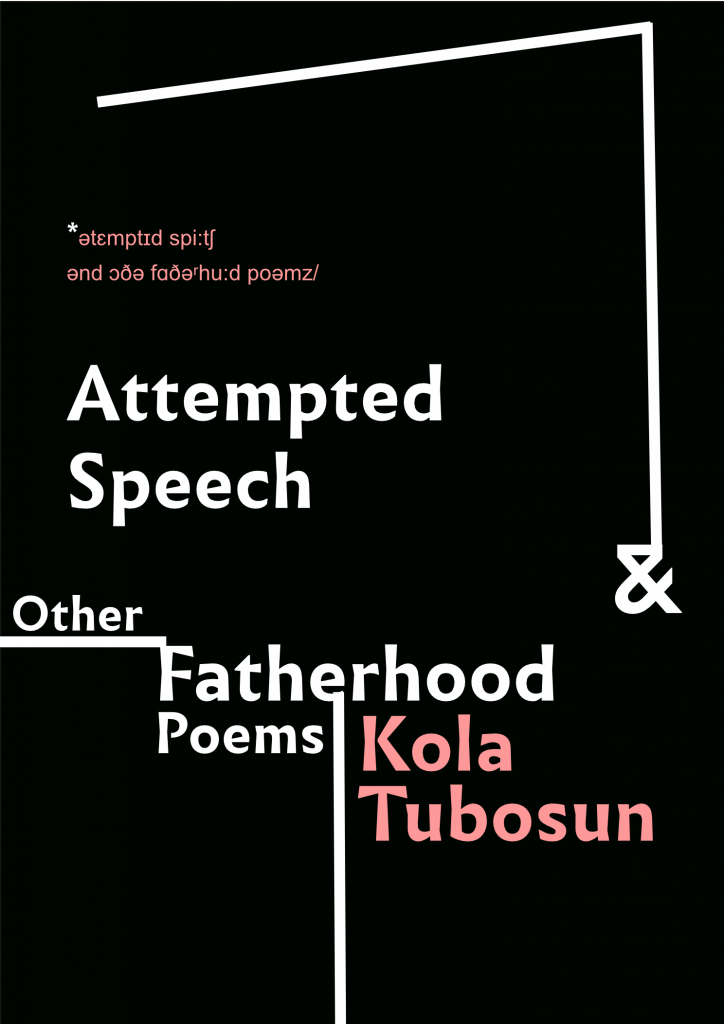 Emily Achieng: How would you describe your process of coming up with Attempted Speech and other Fatherhood Poems?

Kola Tubosun: Luckily, the poems were all written at different times, many during which I didn’t have a specific collection in mind. Just a chance to express myself about certain intense emotions and circumstances.

EA: Attempted Speech and other Fatherhood Poems is a reflection of fatherhood. What makes this unique and special to you?

KT: Fatherhood is a special yet precarious experience. It’s huge responsibility to have the life and future of an individual completely within your power to mould. My son was born at an interesting time of my life, and I hope that the poems record some of my apprehensions and fascinations.

EA: Your preface reads that a few poems are far off from the theme of fatherhood. What influenced them and why did you feel they should be part of this collection?

KT: When we conceived the idea of the chapbook, we didn’t start with a theme of fatherhood. I’d just cobbled together a couple of poems that I thought deserved their time in the light. However, my editors suggested – perhaps because many of the poems were about fatherhood – that I make more of them about that theme which I eventually did. But I also included a dedication to a student of mine who died last year as well as two poems I wrote about ten years ago, slightly related to the idea of talking to a child.

EA: In “Five Days of Warmth,” you divided your poems in five distinct parts exploring warmth in different ways. What is your understanding of warmth in relation to fatherhood based on this?

KT: The poem was written five days after we confirmed that we had a baby on the way. It was my idea of chronicling what I felt for each of the five gone days. You’d also notice that the gender of the baby in the poem switched from male to female, because I didn’t know at the time which it would be. So “warmth” in that regard was a metaphor for a number of things including “dread”, “happiness, “aspiration”, along with the literal warmth of his mother’s womb.

EA: How do you manage juggling between fatherhood and say teaching, writing, editing?

KT: I have a tremendous wife who makes everything easy, and worthwhile. I dedicated the chapbook to her. But you’ll be surprised to know how many hours are in one day, and how much you can do if you try.

EA: In “Stained Glass Windows,” you tell the story of a little boy born in a manger by a virgin woman who eventually saved the world. Then you end by telling your son to stay away from nails and any wooden cross if he grows to save the world. Could you tell me more about this. I found it interesting.

KT: It was my tongue-in-cheek criticism of personal sacrifice, but not necessarily a guiding motto. I assume that I’m doing all I can to bring up a young man thoroughly schooled in the benefit, and importance, of kindness, occasional altruism, and grace.

EA: If your son grows to read this collection, do you feel it would have an impact on him?

KT: I doubt it. I’ve read all the poems written by my father on a number of social and deep philosophical issues, and I still grew up to make up my mind about how I approach the world, although some of them were influenced by his outlook. I hope that my personal example – and the golden rule – is a better guide to him than whatever it is I’ve written on anything anywhere. But I do hope that he asks me lots of questions.

Kola Tubosun is a linguist, teacher and writer, whose professional experience span work as an editor, blogger, translator, and language teacher at different levels of school education. He has worked as a Fulbright foreign language professor at Southern Illinois University Edwardsville and as an adult literacy teacher/volunteer at the International Institute in St. Louis, Missouri. He currently teaches English language at Whitesands School, Lagos, Nigeria.