Saraba Magazine
Home - A New Nigeria – A Conversation with Chinelo Okparanta on Writing and... 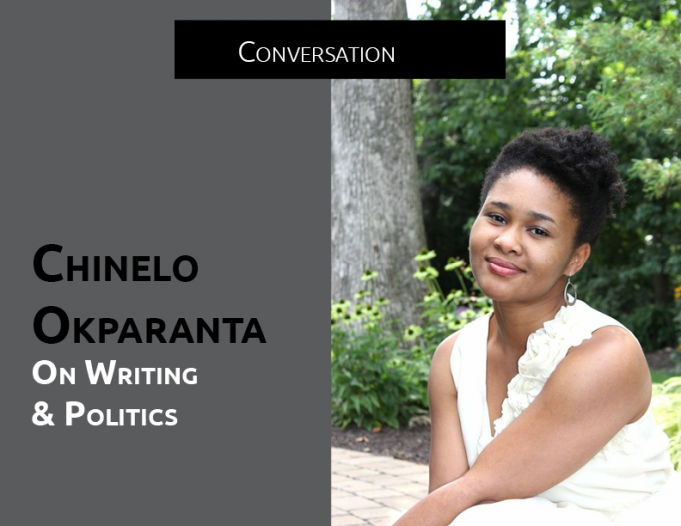 At the 2nd Uganda International Writers Conference on 1-6 Mar in Kampala, I was tweeting and coordinating the social media. One of the panels titled ‘Space and Identity in African Writing: Writing Beyond the West’ had presentations of the authors Jennifer Makumbi, Noo Saro Wiwa, Chinelo Okparanta, Julianne Okot Bitek,

and was moderated by the conference director, Goretti Kyomuhendo. The conversation went in a direction one might expect from writers staying away from the continent, that is, their relationship to the continent itself, and ‘reading the news from Canada on your hometown,’ as Bitek said. However, unexpected was the response from a group of home-based writers. One writer from Kenya, went on to accuse these authors of being privileged, tucked away from the hectic life on the continent. I marvelled at Makumbi’s response to this accusation, that she first really saw poverty in Manchester, suggesting that the grass is not always greener across the Atlantic. However, it was in hearing Okparanta’s response to that accusation that got me interested in her approach to issues of politics in her home country of Nigeria. This is the conversation we had.

Serubiri Moses: Your comment stood out to me yesterday during the panel on ‘Space and identity in African writing’. You said, ‘the world is watching us, as we self-destruct, as we tear each other apart.’

Chinelo Okparanta: I think sometimes we’re just too busy criticizing each other. It’s not constructive criticism. It’s just criticism for criticism sake. And we’re at a point in world history in general, where we should think about unity, and not division.

MS: How does criticism go from destruction to world unity?

CO: If you just look at Nigerian politics, and what’s going on currently with the elections, you know many people have opinions, and nobody is coming up with a real plan. If the two candidates are not adequate, what are our other options? How should we go about effecting something else? I feel like right now the conversations are too many, and they’re no real plans to get anywhere. I just think too much talking becomes noise.

MS: Do you relate literary debates to political debates?

MS: Do you think the same of politics in Nigeria?

CO: Yeah. This is not a proud answer, but I think so. Nigerians are by nature entrepreneurial. But I just wish that, in some cases, more were actually being done.

MS: What would you like to be done, both in literature and publishing?

CO: Writers are doing their job right now. We have many, many, writers in Nigeria. For example Chibundu Onuzo, Uwem Akpan, Igoni Barrett, Chika Unigwe, Teju Cole, Chimamanda Adichie. Now publishing houses are trying: they’re on their way. We have Cassava, Farafina, Parresia, and I hope that there’ll be many more in the future, with functional printers, electricity, etc.

MS: What about in terms of politics and government?

CO: What if writers could come up with their individual visions of a successful government, and write their novels with these visions in mind? Some could then form an alliance with government officials, and use the best elements of these visions to implement and form a better nation.

MS: That’s a great idea. It’s been done before, in Senegal.

MS: With Senegal, Leopold Sedar Senghor together with Aime Cesaire, and Edouard Glissant wrote poetry in the 40s and 50s. They published their work in Presence Africaine in Paris. And when Senghor and Cesaire became leaders later, they implemented their negritude vision for national identity through culture.

MS: Yes, what Senghor did when he became president of Senegal is that he initiated the Festival Mondial, or World Festival of Black Arts, and within that festival he invited all sorts of leaders from all over Africa and the Caribbean for a symposium on Black Art–were they ministers or presidents–this really sparked off, or was an early precursor of Pan African cooperation on the continent and organizations such as the OAU, which is now the AU; and several other festivals like Zaire 74, Festac 77, and other festivals which came up after that. But also, within Africa itself, culture was one of the things connecting African countries and connecting the people of Africa—which is one of the things you talked about earlier—when you have writers actually engaging with a political vision, these are some of the ideas that come out to form unity and peace.

CO: Right, exactly, because unity, for me, is very important now. And I think what you are saying basically is that culture is the first step to self-governance. If we have a healthy sense of national identity, free of corruption, for example, then we will have a healthy vision of how to govern ourselves. So, yeah, well, Senghor beat me to it! But I think that’s an example that can work, and hopefully work even better than back then.

MS: I was going to ask you a very challenging question, how would you, if given a task by an official, say Obasanjo, to write a novel?

CO: Yeah! We have moved on from Obasanjo.

MS: If Goodluck Jonathan asked you to write, what would be the new Nigeria?

CO: Yes. I am doing just that. I have been thinking about it for at least a year now. About ways to restructure the government; ways to unite the country, even with all the lines of division that already exist. I mean, sometimes it seems, especially in these writing conferences, we like to remind ourselves of how there are these tribal differences. That the Yoruba are different from the Igbo, who are different from the Hausa. And so these days I think a lot about ways that we could possibly acknowledge our differences, and figure out the oil issues, for instance, which is a source of so much division amongst the tribes in the country. So, I’m just thinking now about all of that, but, maybe, one day I will be working with a politician to implement my vision. I don’t know.

MS: Okay! That sounds good to me.

CO: And they think about power, and staying in power. They don’t think about ways to actually better the whole. Many times, these people are thinking from an individualistic perspective, and how to benefit their ‘little’ crew. I think it is about time that we think about the whole. All this focus on money is a little destructive, actually very destructive.

Money is important and people don’t have it; and people think about it. Many Nigerians—many people in general—are concerned with where the next money-making business is; they have to think about where their food will come from; where school fees for their children will come from. So, money is important, to an extent. But, I guess, I just feel that the majority of the people who have the money have so much of it and are only interested in hoarding it.

MS: What was the distribution of government revenue in Nigeria in the past amongst the tribes?

CO: These are things I have read up on my own and have found in conversations with older Nigerians. Back in the day before oil became the big thing, the North used to grow groundnuts. They would harvest the nuts and that was their source of revenue. With the Igbo people down South we used to do palm oil. And then the Yoruba did Cocoa. And so what would happen was that they would, I believe, take 50% of that revenue, and give 50% to the Nigerian federal government. This is what a friend of mine, a Nigerian, told me.

CO: It almost feels like going back to the past would be one of the possible strategies. But we would still need to figure out what to do with the oil.

MS: Right. Do you think that by taking the focus away from the oil, and the big money right now in Nigeria, that more can be done, and that more peace will prevail in Nigeria?

CO: Yes. I think everybody says this: Oil is as much a curse as it is a gift. We still need to figure out what to do with the oil. It’s there and something needs to be done to satisfy all the groups involved, including the Ogoni people. All these people laying claim to this oil – that’s the source of the conflict.

MS: I think of authors like Ama Ata Aidoo, Mariama Ba, Bessie Head in South Africa, Nadine Godimer. And coming from an art context I think of authors like Koyo Kouoh, Elvira Dyangani Ose and Olabisi Silva. And right now you look at the African Union, you can count the women who are doing anything in terms of making decisions. But how is it in Nigeria, when it comes to oil and big money? What is the place of women?

CO: The place of women, from what I understand, is the same as it is in many other places where women are struggling to get up there. We have the finance minister Ngozi Okonjo-Iweala, for instance. Other women are also shaking up Nigeria a little bit, but a lot more could be done. I think it might make for a better Nigeria if we have more women in leadership positions–and that applies across the board worldwide. The world could benefit from having us as leaders, if not for our being women, then for our having a different perspective.

CO: Making laws, implementing those laws. I think our strategies are different.

MS: I’m going to put you on the spot. So do you know about the anti-homosexuality bill in Kampala?

MS: How would you as a writer rewrite that entirely, if you were given the task?

CO: I know of it. I haven’t read it. I would have to look at it. But my initial instinct would be just to get rid of it.

MS: It goes back to the central point: writers would probably have a completely different perspective to add to this conversation.

CO: Yes. So writers need to rule the world next.