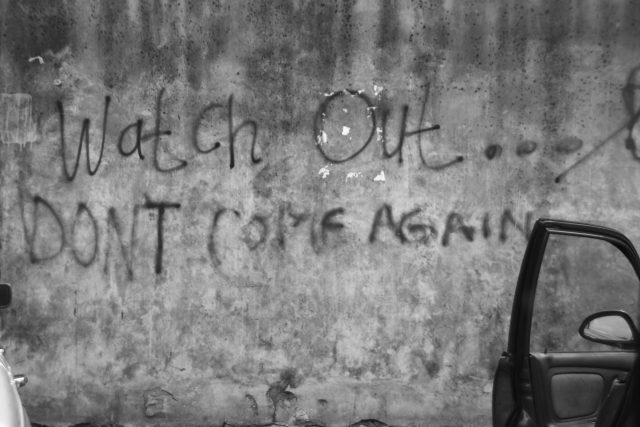 Kaduna Prisons sits in the middle of the city. It was established in 1915 as an Old Convict Prison, with a carrying capacity of about five hundred and seventy eight inmates. The prison is surrounded by a thick wall and small camps of military personnel. I stepped into the prison courtyard for the first time on January 21, 2015. This was after a month of enduring bureaucratic procedures that granted me access to the prison facility. I had to convince the authorities of my intentions to witness the prison reality; to prove to them that reading and writing are an individual’s endeavor to discover, an adventure of the mind to distant lands, a conversation between souls, and a site for contestation between generational thoughts and ideas. I reached an agreement with the prison authorities to visit the inmates for readings and conversations once every week. This is a report of my visits.

Eventually, I came to regard the prison as a hospital, with new inmates admitted on almost a daily basis. I approached it as a space where the notion of justice is contested. And together with the inmates, we made it an extension of humanity and a base for an exchange between isolated perspectives and lived experiences.

I found it difficult selecting books for the commencement of the reading campaign. I thought about the language barrier in a prison in northern Nigeria. There were inmates who could not read and speak English, but were fluent in Hausa language and Fulani. Buba, a warder with the Nigerian prison, spoke to me about an adult education class he had started with the inmates. There were a fair number of literate inmates who could independently appreciate a work of literature in English. He suggested that I include a couple of indigenous books in my selection. Such as Magana Jari Ce, Dankutungayya, Dan Agwai Da Kura, Muguwar Kishiya, the Pacesetters series, and a host of other titles. So, when I started stocking my mobile library, I was conscious of the burden of choice I was saddled with, and hoped that my preferences will meet their expectations.

At 10:00 A.M., I walked into the prisons courtyard and was led to a hall with a few pews. There were about twenty inmates waiting. We had the customary exchange of pleasantries. I introduced myself and my mission, and was received warmly. At this point, an inmate who had skipped the introductions stood up. There was an ultimate silence in the hall as he stared at me. I thought he was about to challenge my intrusion into his space. I felt agitated. I remembered the last jail break in 2010. It was bloody, and for weeks Kaduna town was haunted by the fear of the unknown. In my mind, I imagined a scene where I am thrown to the ground while receiving a beating. Instead, he said, “I think I like you and the plans you seem to have. I have been here long enough to know that all our visitors come here to save us, or preach to us about their twisted idea of the truth. Then they endure a month or two and varnish afterwards. You know we have a church here and mosque in prison but, no library man. We listen to funny tales of salvation and the world beyond. Recently, I came to realize that religion is an exhibitionist endeavor, a tussle for supremacy among its adherents. I look forward to having engaging discussions with you, how long you remain with us will earn you my name.”

He sat down to a rousing applause and looked at me unflinchingly. Later I learnt he was called “Professor,” that he was a trained teacher and graduate of geography from a premier university in northern Nigeria. And while he served a life sentence for murder, he was a Teacher with the Prison educational programme designed for inmates. The session came to an end two hours later. I went round retrieving the novels. One inmate pleaded for one minute; another memorized a page number.

On my second visit, the class wall was filled with graffiti, a page number, a favorite phrase from a novel and several book titles. The class was scanty. Ten minutes later, the inmates strolled in, looking angry. There was a cell search in the early hours of that day. I picked that tale from the lamentations oftwo inmates, whose valuables had been confiscated. I looked outside the window; there was an ongoing football match outside the class. The visiting team was from Tudun Nupawa. The prison football team was defeated with a lone goal. On the class dark board ‘’Professor’’ had written:

For two months we had studied Isidore Okpewho’s The Last Duty and Chimamanda Adichie’s Half of a Yellow Sun. Through a game of dice, we had nominated a panel for this discussion one month ago. Before our Panelist on the civil war novels came on stage, H. shared the story of his father Alata, a civil war veteran. Alata developed a habit of poking his gums with toothpick until they bled and loved the taste of blood in his mouth. Men like his father, H. lamented, were deserted and mocked because of their strange attitude many years after the war. And he could not bear to listen to the book talk because Alata died the previous night. He left the room.

Okpewho’s The Last Duty was Brabra’s favorite Nigerian civil war novel. Brabra is the pen name of a lad in prison for alleged rape. “The novel illuminates the inner rumblings of its characters and depicts a broken humanity at moments of adversary. I celebrate this novel for revealing how war destroys the family unit.” This thought set in motion an hour of arguments. I stood there and marveled at these literary parliamentarians travelling to different epochs in history, arguing about facts and the potency of imagination.

At midnight, on a cool harmattan night in December, I was struck by insomnia. I put on my reading lamp and sat down to read a memoir from the writings of inmate Y. Those lines written as a recollection of a life of radicalism and crime were also about Y’s loss of childhood innocence, an early life of cultism, a long affair with alcohol, love for rap music: Common, 2pac, Nas and Kendrick Lamar, and migration from Benue to Kaduna to escape gang violence in his neighbourhood. He wrote with intensity and drew my heart to his world. He might have captured his thought about major events he had experienced with inchoate expressions, but he compensated for that by experimenting with form. He wrote without the need to present a chronological narrative. As his reader you acted as a surgeon, sewing ideas together to create meaning. Y’s memoir expanded my perspective on mercy and what cruelty the human mind can endure. In his story, I discovered my limited understanding of forgiveness and how far we go to receive it.

Katung Kwasu is a Reader-in-Residence at Ilmi House, Kaduna. He is the Coordinator Reading and Writing Initiative Kaduna Prisons.

This story is from our Crime Issue. Download to read more. Image by Eloghosa Osunde, from the series “Walls,” featured in the Crime Issue.