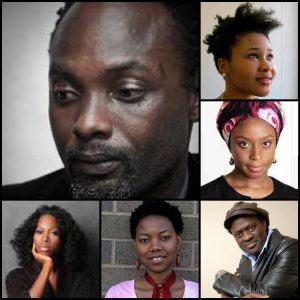 The year 2013 is looking to be fantastic for African Literature. Last year Eghosa Imasuen, Chibundu Onuzo, Sefi Atta, Chika Unigwe ,Emmanuel Iduma and many more published excellent works of fiction. African literary greats; Ngugi wa Thiong’o Chinua Achebe, Wole Soyinka produced long awaited memoirs – adding to our collective narrative and stirring fierce debate. There is still a lot we have to catch up on but its January, so here’s another list.  We have selected a few we are looking forward to getting our hands on. (Note: this post may be updated.)

Happiness like Water by Chinelo Okparanta ( Granta Books); a graduate of the Iowa Writers’Workshop. Her first piece,  Runs Girls was published in the Exit Stratergies issue of Granta magazine and she was featured in their New Voices series. Happiness like Water is her debut collection of short stories centred on Nigerians at home and abroad facing challenges. A couple struggling to conceive, two women isolated in different ways seeks comfort with each other and a young woman struggles with a dilema to save her mothers life.

We Need New Names by NoViolet Bulawayo (Chatto & Windus); Noviolet was the 2011 Caine prize winner for her story Hitting Bhudapest  published in the Boston Review. Her new vovel focuses on Darling, one of the rag tag band of children in her short story. Having realised the collective dream and made it to America she learns that paradise is never quite what is promised.

Ghana Must Go by Taiye Selasi (Viking, Penguin) first came to attention with her article Bye- Bye Barbar or What is an Afropolitan? which defined a new generation of young, culturally astute Africans. Her short story The Sex Lives of African Girls was published in the F Word issue of Granta magazine and is one of their most downloaded. A death at the beginning brings together a family,  earlier deeply fragmented by events in their lives. Selasi conjures a wonderful tale of loss, leaving and the African immigrant experience in the face of American modernity.

Love is Power or Something Like That by A. Igoni Barrett (Farafina Books) is the second collection of short stories. He has published pieces in Guernica magazine and his excellent essay I Want to Be a Book: On Becoming A Writer was published on The Millions. Focusing on love in modern Nigeria, the stories are inhabited by a milieu of vivid characters including a corrupt police officer who beats his wife and a young man who seduces men online pretending to be a woman.

Tomorrow I will be Twenty Years Old by Alain Mabankou (Serpent’s Tail) is the fifth novel published in translation from french. Michel is a young boy living with his parents in 1970’s Congo dreaming about the destinations of the planes that fly over head. Loosley based on Mabankou’s childhood this is a darkly funny funny account of growing up.

Americannah by Chimamanda Ngozi Adichie (Farafina Books) is the second novel from the MacArthur Foundation fellowship grant winner. Set in America and Nigeria,  a story about childhood sweethearts pulled apart by military dictatorship and eventually reunited. Can they be the same after such different experiences in the West?  Here she discusses Obinze (one of the characters) and the some of the challenges he is faced with.