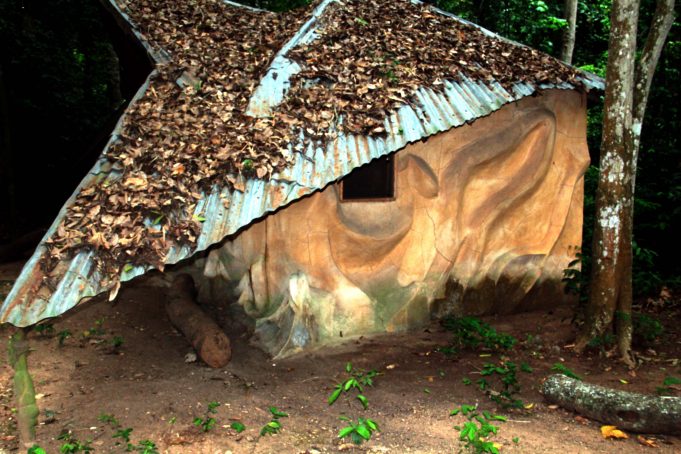 Say, “It is not Abakaliki. Aba Nkaleke.”

Be born there. Grow up there.

At St. John’s Primary School Okpaugwu, listen to the kids from the other states talk about where they come from, the places they had to leave to live in your “village.” Keep quiet when they say their doctor-parents were transferred here because there are no doctors in your city. No, don’t flatter yourself; they say it like this: “There are no doctors in Abakaliki Village.” Wonder if that is why your father has that big brown book in his shelf with the title, Where There Is No Doctor. But then you think about Dr. Nweke, the doctor who checks your teeth and speaks Ezza to you. You understand him because he could be speaking Izzi—the Igbo dialect spoken in your area of Abakaliki—if he doesn’t make final vowels come out with an extra syllable. Think about him, then repeat in your head: “There are no doctors in Abakaliki Village.”

At home, ask your father if Abakaliki is a village. He smiles and tells you to get your 20 Leaves Exercise Book. Follow his finger as it points out “36 States and Capitals” on the back cover. You repeat after him: “Abia, Umuahia. Adamawa, Yola. Akwa Ibom, Uyo…” Continue till he stops at “Ebonyi, Abakaliki.”

“You see, Abakaliki is the capital of Ebonyi State. A village cannot be the capital of a state, only a city can. Do you understand?” Your father speaks Izzi with a distinct punch on the key words; the same way he might hit buttons on a calculator.

Say “Yes,” because you understand him. You believe him. But you can’t tell your classmates this. Well, you don’t have doctor-parents who get transferred to villages without doctors.

When you place fourth position in class after several terms of being first, listen to your teacher say that the Enugu and Anambra pupils are teaching the Ebonyi pupils how to be intelligent. Look up at your three friends; the boy from Enugu stands between the Anambra boy and the Anambra girl. Their precocious grins bounce off the blue flush of your face as the headmistress shakes their hands and presents them gifts.

Wonder about the coincidence as you walk home; you’re in Primary Four and you’re fourth in class. What will happen in Primary Five?

For secondary education go to a boarding school, a prestigious minor seminary in Ezzamgbo where some of your classmates boast that the Rector is from Anambra, their state. They say a priest from your state will never be the Rector. Argue till your voice cracks into a shrill huskiness. Shout to them that their Anambra Rector has lived in Abakaliki all his life. Yell at them. Ask them why they came to study in a bush state. Whenever they say you like to argue too much, walk away to Prep with words strained against the tautness in your throat.

Get very upset when they make casual jokes about how your name sounds like a species of yam. Like Jí; the only thing your people are good at producing. No wonder your calf protrudes the way it does—is there a real yam inside? They change your name to Obor-Jí. Cry when they call you that.

You tell your Mother this when you come back for Christmas break. She doesn’t get mad. Get irritated at this. Then listen to her talk about the day at a CWO meeting: She had stood up to oppose what an earlier speaker said. Halfway into her speech, the other woman interrupted her and asked if she now felt like she knew better just because her bush community became a state the other day. Did she not know that if not for them Ndi Mba, Ndi Ijekebee, the state would still be a bush till now? When she says she ignored her, imagine how that is possible.

Sometime in 2008, observe with terror the devastation that is the Ezza-Ezillo communal crisis. You notice that the voice of the newscaster on Unity FM is pained, that her Igbo has flecks of the Ezza dialect in it. On TV, the images are gory but blurred for censorship; red cracks on some kid’s skull, burnt-out vehicles, remains of what used to be residential homes still offering black smoke in mournful slithers to a wet sky. At newsstands and along market lines and in your classroom, several non-indigenes say what you imagined they would say, that warring is fun to Ebonyi communities; they find peace so boring.

Tell those who would listen to look beyond the smoking cars and see the politics in it all; there is an ongoing propaganda against the incumbent governor as gubernatorial elections draw close. Show them reports alleging that the militants are not people from the supposedly warring communities but hired mercenaries drawn from the breadth of the country. They are stopping commercial motorcycles on the Enugu-Abakaliki Expressway and burning them with the occupants. The survivors tell tales of sitting corpses inside black-burnt cars lined in convoy-fashion on bloodied tarmacs. Ask them: “Don’t you know how disgusting Nigerian politics can get? Who burns innocent vehicles because he is at war with his neighbour over land ownership?”

When, several months later, the Federal Government finally sends many armoured cars full of armed soldiers to quell the crisis, sigh at the incredulity of it all. “Something they could have done a long time ago.” Your classmates at St. Augustine’s are saying that it is the most casualty-filled conflict the country has seen since the Civil War. Laugh it all off because you know about the mid-20th century history of the Aguleri-Umuleri conflicts in Anambra State. You know about the eventual degeneration into a full-blown war in 1999, and how intractable it has been. You know about the thousands of lives it has cost.

Get admitted into University of Nigeria, Nsukka.

Learn about the people of Nsukka. Learn they are kin; they are the “backwards” of Enugu State.

Listen to your lecturer at a General Studies class say that the knowledge from the University seems to evade Nsukka people. Play with the idea of asking: “What if the knowledge from the university is not palpable enough?” Then let the question drain from your mind, like the ink in your pen. Keep scribbling painfully away. Look up at him when he says Nsukka women are contented with motorcycles and computer centres and making babies.

Get into an awkward situation in your second year. Your Nsukka roommate says he sometimes feels unlucky to be Nsukka because… “Yes, I can relate,” you interrupt clumsily. “All those terrible stereotypes…” Then mention all the terrible and not so terrible stereotypes you can remember. Tell him you have similar stories, as an Abakaliki person.

“No be wetin I wan talk be that sef. And for your information, no dey even compare Nsukka and Abakaliki at all. We get plenty stereotype and me I accept am. But una own too much jare. Una own no be stereotype anything, na true most of them be.”

Go to Gala Nights organized by your department and your faculty. The MC doesn’t have enough jokes. So, put up with the many moments he has to bring up the state you come from for ridicule: Ebonyi people have machetes with them everywhere they go, even in their wallets. He is scared one of them, one of you, might walk up to him with the precise ferocity of a hunter and cut him down. But then he adds that he only feels safe in the knowledge that Ebonyi people don’t go to school, it’s just not in their blood. “I can bet my balls there’s no one from Ebonyi in this hall. Abi una fit prove me wrong?” A few heads turn to look at you, your classmates, your friends, daring you with their amused eyes. Pretend not to notice them; instead, watch other spectators pretend the MC is funny; they have to laugh and justify the cost of their VIP tickets. Frown. Then Smile.

Hear people say you don’t look like you’re from Abakaliki. They say you’re kinda different, did you grow up elsewhere? Your English sounds normal enough; you must have Enugu blood. At first, feel a bit flattered. Then get embarrassed at yourself.