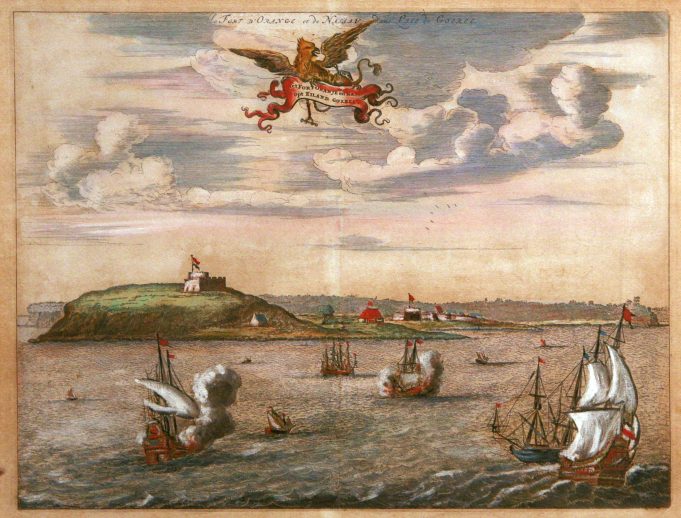 Gardens blossom in the making of empire, even in dry and arid territory; an obsession with land coupled with its fertility formed empire in the classical period; empire is a garden; a garden symbolizes production; money trees are the primal show of colonial wealth. The giardini in Venice is a typical example, extending into the lagoon.

As a child, I visited the botanical garden in Entebbe, Uganda. The colonial administration constructed Entebbe airport on the bay; its early Lutheran church, botanical garden, and manor houses symbolized the wealth and occupation of the colonial regime. The botanical garden, a large scientific utopia in the middle of Entebbe, was later the site of two Hollywood cinema productions: Africa Addio (1966), and The African Queen (1951).

I recently saw a garden on the island of Goree, off the coast of Senegal. Slave boats from Elmina Castle, and other forts along the West African coast, docked on Goree to replenish on food and drink. Goree’s bougainvillea vines symbolize not only wealth but hope; the Catholic Church in Goree’s town square is an erected sign of faith. Here, the garden of empire bleeds its bougainvillea vines and baobab roots into the everyday fabric of Goree’s street life. Goree’s system of armor, a 15th century revolving gun, seen from a distance, doesn’t compare to the war castle armory of Elmina. I saw a house by Rue de Jardin, the home of Myrto Debard, a French artist who often painted images of Senegalese women. Her home in Goree raised my curiosity: how the island town with several slave houses inspiredher series of paintings; Goree’s existence as a site of enjoyment and inspiration contradicting with the role of the town’s involvement in the Trans-Atlantic slave trade.

Debard’s art house in Goree reminds us that while gardens of empire can be aesthetically delightful spaces, their roots sink deep into the historical machine of colonial labor and capital. One night on the grand canal, J. described Venice as a city wasting away on sinking trees. I could not fathom how Piazza San Marco, with its marble pavements, the Doge’s office, could be sitting on a bunching of trees on the Venetian lagoon. Then, I found a book called “Winter in Venice” that showed floods coming up to the height of door handles in San Marco. J. spoke about the pines of Northern Italy holding up the mansions along the canal; yet, now, sinking. Their pure white marble thresholds now dirty green with algae and sea weed; vineyards in Northern Italy; the Alps rise out of the earth; their ridges like a prolific hand drawing of the human figure. Shrubs on the Italian side of the Alps contrast with tall-tall-tall pines on the German side; they seem to touch the sky, which disappears every now and again as we crawl through the tunnel eating through the Alpine face: could these be the pines holding up the aquatic city? These pines whose pureness is not of man but of nature say, “I am too pure for you or anyone,” as Sylvia Plath wrote.

Piazza San Marco comes back in memory from Renaissance art history books; I tell J. that the open-ended square is not like that in Paris or London. In a painting of the Piazza San Marco, a lion towers above the square; San Marco’s basilica: its ornamentation, its Florentine domes; its Constantinople arches. A monk walks across the square dressed in a maroon cassock. J. points out the giardini. I saw the strange pines in domesticated formations; short compared to their tall-tall-tall cousins in the Alps. Money trees reminded me of how young passion fruit vines search for light beyond the shadows; an image of the choking canal, and its sinking capital.