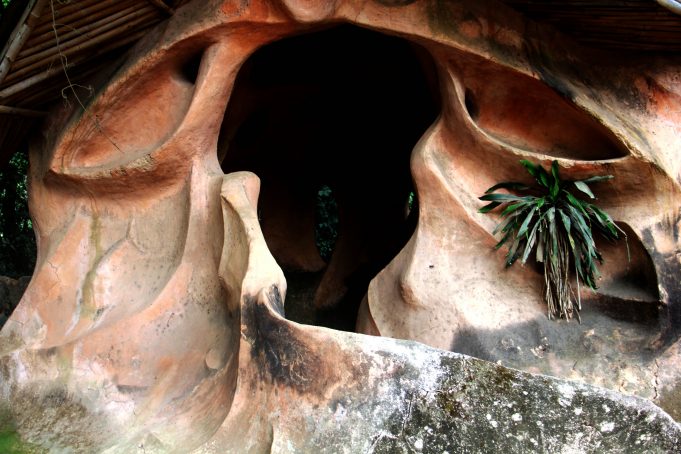 Photograph by Ayo Akinyemi, from the series “The Sacred Architecture of Osun Grove”

Mieso was a speck on Ethiopia’s map. A small place, remote and tucked away. We were Lesotho without the diamonds, and sometimes without the water. Caught between clunky railroads and beautiful valleys, Mieso was a contradiction. It was the tenderness of a mother, but the distance of a father. The bitterness of injera coupled with the poignancy of split peas. Somber, yet reflective.

In our youth, my little brother Mo and I clung to the only promise we knew, the promise of the mountains. Although vast, they yielded a maternal instinct. As we meshed with the earthly elements, our feet spent only moments on one rock before accompanying another. Leaping across narrow paths, our toes traced each stone like a goat’s hooves, managing to hold on with just inches of space.

With each step, it felt as though the mountains were exuding discontent. But when Mo climbed, he stepped only where the cliffs welcomed his bare feet. Even though Mo stood no taller than 5’6, his large feet and built arms added deceiving strength to his slender frame.

During these climbs on the mountains, remnants of our visits to Addis crept into our heels. I could feel the sting of cigarette smoke lingering in the back up my throat as we nibbled on dates and chased prairie dogs. Mo would follow my lead of belting solo vocals, and we had spontaneous soul train moments. Allowing the mountains to absorb each note, we channeled Bob Marley and Queen recklessly. The movement in our hips brought on by the memory of funky instrumentals. The steady bassline that gave my hands a choice between clapping and doing the disco finger. Sliding, shifting, grooving. We experimented dangerously, dancing Eskita to “Papa was a Rolling Stone.” Combining half splits with gyrating shoulders, we launched our bodies backwards, trying to see who could get their head closer to the ground. Once, we even had a flippant argument about “No Woman No Cry.” Mo thought it meant “if you have no woman, you no cry.” I thought Marley didn’t want any woman to cry.

When we got to “Bohemian Rhapsody,” we could only hum the song, unable to keep up with the words. We weren’t sure what the song meant either, but they said “bismillah,” so we were pretty confident it was halal.

Though this banter was common, Mo need not remind me of his skill on the rocks. Despite my desire to continue talking, I was losing my breath as we ascended. In this altitude, age didn’t give me an advantage over Mo. My scrawny arms and soft calves did little for the strength required to hoist from one stone to another.

Mo, jeering at my pace, would make a point of showing me up. One wet evening, he sat hunched over an uncomfortable looking rock in dismay. Pretending to read grains of sand, he seemed forgetful of my presence. When I caught up, Mo tilted his head sideways and a frown crept across his dimples.

Looking out from under his bent arm, I could see the moon peeking from over his shoulders. Hitting his face at just the right angle, the light contoured his jawline and traced the cracks in his neck.

Tempered with a button nose and flat ears, his appearance hinted at a stoic nature. But his words cut the air like a sharp gust. Behind Mo’s dull expressions lay layers of eccentricity and fervor.

Everyone saw a bit of our father behind the goofiness of his adolescence.

Mo always looked perplexed—eyebrows scrunched, lips pursed. Eyes always searching, as if he could actually hear the mountains and the earth they sat on. Like he’d lived this life before, and wanted something different this time around.

Grabbing his hand, I used his index finger to trace the horizon until we were facing the sun. The sun continued to glisten, only temporarily being shrouded by clouds, despite the moon’s tenacity.

“Don’t worry about it,” I said waving him on. “We have plenty of sunlight left.”

As we made our way through the narrow passes, we reached a dead end. Naturally, Mo seemed to have other plans.

Rocking onto his heels, Mo took two long steps, gathered a running start and leapt forward. Landing on his knee, Mo winced in pain before gathering himself. The blood from the fresh gash began to engulf his entire kneecap. Within seconds, even his feet were tinged with deep red blood stains. Looking down at what had to be a 20 meter fall, a lump began to crawl in the back of my throat.

“Yassin, just jump!” Mo yelled as I stumbled backwards, gauging the distance with my eyes. Launching myself forward, and managed to grip a mossy rock. Throwing my leg up, Mo grabbed my torso, pulling me forward.

Finally reaching the peak, Mo kneeled and threw his hands up.

“We made it,” I said, hand clasping my chest as I gasped for breath. Forcing a smile, my crooked bottom teeth gleamed against the sweat that now soaked my face.

“And our lives would be over,” Mo mumbled, as we crouched and laughed half-heartedly.

“Cheers, then. This goes to our grave.” Raising a handful of dates in one palm and shaking Mo’s hand with the other, we sprawled across the sandy peak and stared across the plains. From what was basically our backyard, we could spot elephants, giraffes and zebras. On this occasion, an Albino zebra trotted along, dashing between pockets of rhinos and antelopes.

As the sun traveled across the horizon, a duo of hyenas was visible from across the plateau. Seeing them, I mimicked the shrill laughter, causing Mo’s legs to shake. Watching the sun sink into the peaks, as if to shirk responsibility, we stumbled quickly towards town. With each step, the pebbles softened beneath our feet.

These were the “Ethiopian Alps” we said proudly, marveling at the gentle curves that gave way to riffs and valleys.

I called it “walking,” but we read somewhere that they call this “hiking,” and that it is popular in Western Europe. Why then, we’d ponder, were the Italians unsuccessful in Ethiopia? Were the mountains a fortress?

But this time, as we stared along the horizon, the insurgents that toppled Haile Selassie’s monarchy stood at the mountain’s feet.