Saraba Magazine
Home - “They are secrets the desert kept of itself”: In Conversation with Tade...

Publisher: Hornbill House of the Arts 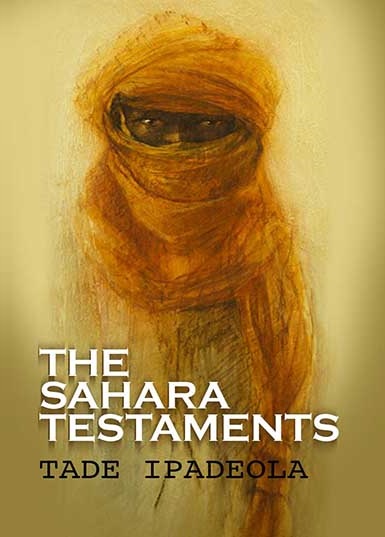 Tade Ipadeola presents to us—with aplomb—memorable moments and histories in The Sahara Testaments. In this volume of poetry, he invests his creative energy in playing with many historical, geological and geographical coordinates that are not only complex but also fractal. While he will not be the first to do this, his foray certainly becomes crucial and vintage because instead of writing the Sahara from the purview of Africa, he connects and writes Africa using the Sahara—a region often thought of as a desert in every sense—as a contemplative template and a central motif. But beyond the Sahara, TST testifies to a lot of things. Unlike its title that gives the impression that the book only does a regional investigation of Sahara wonders, the poems here speak of, for and about Africa as a whole. Working with a sort of triangle of laziness, I will briefly engage, in what follows, this book’s concentration on Africa from two prisms: the negritude and post-negritude.

In the negritude phase, Ipadeola’s attempt tends more towards a project of resuscitating “continental pride,” to rework Ania Loomba. Here, he unabashedly echoes Africa in a tone and manner similar to Léopold Sédar Senghor in “Black Woman” and David Diop in “Africa.” The first obvious instance of this comes as early as the second movement of the first chapter. Describing a “fishwife in her wooden market stall,” the poet launches into a eulogy that, in part, reads as follows:

That woman was Senegal. Senghor’s woman

Immortal in her blackness, market wise

Bringing back tides of the musings of a man (4)

This strategy is not new; it earned the Negritude brothers the infamous caveat that Soyinka gave: “a tiger does not proclaim its ‘tigreness’, it jumps on its prey.” It is not new because we can also safely assume that, similar to what Senghor does, the woman whose idyllic beauty the poet eulogizes above is an archetypal representation of Africa’s terrific splendor. What is new, however, is that the poet reverses the binary formation of blackness and whiteness which Gary Taylor has interestingly preoccupied himself with of late. Ipadeola does it simply this way:

Her teeth glisten whiter than the sassier

Neighbour’s, whiter than any woman’s, so white

I wondered if God knew she’d make it

Into a magnet for custom and light.

In the above, the poet de-centers color—nay, deconstructs it—by including whiteness in blackness so that at the end diametric oppositions break down sharply. This is new, at least when compared to the matrix of “black cultural importance and autonomy” (in Janet Vaillant’s words) favored by the negritude brothers and sisters (the Nardal sisters and Suzanne Césaire as recently reclaimed by Sharpley-Whiting). The negritude experiment persists. It is, again, what we are presented with at the opening of the third chapter of TST. Here, the city becomes the sentry of praise and romantic crooning of Africa’s greatness; Marrakesh and Casablanca get their doses of Sahara quatrains. The green “Nigerian passports” also gets mentioned here; not in the popular context of crime but in a context of “manifest envy” (44). The same thing goes for animals, rivers, phases, places, people and war victories and losses in Egypt, Morocco, Sudan, Senegal, Niger, Chad, Nigeria, Ghana, Mali, Tunisia, Mauritania and South Africa among other African countries that the poet writes about.

But like I hinted earlier, this volume is not all about “manifest envy.” It is also a biting commentary on the sad state and an abyss of grandiose failure into which Africa has pushed herself. This, of course, is what I refer to as the post-negritude type of focus on Africa that the book has. The reader will find an example of this as early as the third movement of the first chapter where the poet begins what later turns out to be a lengthy elegy. He laments:

The decorous chameleon of my continent

Rouses to incantation from gas flares

And a millennium of sand turns pertinent

In a sea-bound spill of harried hectares

There is no stealth to the spreading wound

No genteel grace to the usurped ground

Famished of clues to a lost nirvana (5)

What we have in the foregoing is a sharp breakdown of the negritude motif; here Africa begins to answer for her crimes not for her beauty anymore. The idyll is no more and all that is left seems to be self-admonishment. The central concern here seems to be one of Africa’s greatest problems—oil. In four sets of dazzling quatrain, then, Ipadeola offers a sardonic glance at the wondrous, reckless and criminal despoliation of nature. While his graphic use of language and nature-feeling lines intertexually call to mind Niyi Osundare’s The Eye of the Earth here, they particularly amplify the cycle of waste and unalterable silliness that has, over the years, come to define the operations of the oil multinational companies in the Niger Delta and Africa in general.

This volume, however, does not go without its disappointments. The most obvious demonstration of this can be found in the occasional failed attempts by the poet to provide a discernible scheme of rhyme. In some instances, we witness this shortcoming as a case of total deviation from any systematic rhyming, and in others, we come across it as a sort of unpredictable vacillation between alternate rhyme and monorhyme within the same sequence of a chapter. Apart from this, there is the issue of arcaneness that may preclude the average reader’s easy entry into this work. In a way, this is not so much a case of “syntactic jugglery” as it is a case of Walcott’s Disease (apologies to the boolekaja critics). But whatever these flaws are, Ipadeola’s perspicacious rendition of sublime poetry in this book subdues them all to a point of near silence.

This type of poetry redeems a lifetime; flings open the pot of “secrets the desert kept of itself.” Delightful, so delightful to read!

And to conclude, if what we have seen in modern Nigerian poetry tradition in recent years has been an unfamiliar poeticization of familiar happenings—an uncommon troping of common themes—TST raises the bar by distrusting, debunking, retelling, re-reading but most importantly re-assembling Africa’s long tradition of “civilization” in a manner that recalls Cheikh Anta Diop’s efforts at (re)placing the “Africanness” of Nile Valley and establishing the unified destiny of Africa. Like Diop’s, then, Ipadeola’s attempts to tell and rescue the tale of Africa from centuries of deliberate and purposeful mistelling is not a common one. To be sure, what Ipadeola does is to reclaim a space which today gradually slides into the oblivion, a space which—worse still—remains unknown to many of Africa’s children living in the 21st century. This space of course is the Sahara Desert, which, in the hands of the poet, both jumps up and sings and breaks down and cries. This type of poetry redeems a lifetime; flings open the pot of “secrets the desert kept of itself.” Delightful, so delightful to read!

Tosin Gbogi is of the Department of English Studies, Adekunle Ajasin University, Akungba Akoko, Nigeria. He was the 2012-2013 Fulbright Scholar at Tulane University, New Orleans, USA. He practices Literary Criticism and Linguistic Anthropology.