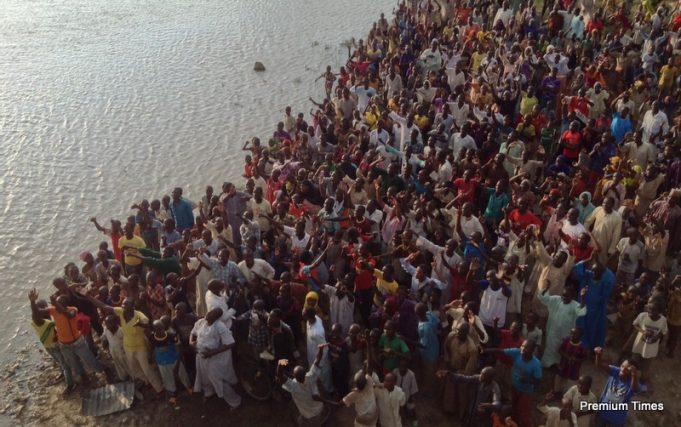 Let me begin with four annotations:

—May 7, 2014: Security Officials Confirm ‘Over 100 People’ Killed by Boko Haram in Gamboru, Borno

—May 12, 2014: Boko Haram: Nigeria Has Failed Us; We’ll Relocate To Cameroun—Mourning Gamboru Residents.

There is a photograph of the people of Gamboru standing beside a river on the Cameroonian side of the Nigerian border, cheering as soldiers clear out the remains of Boko Haram from what used to be their home. This photograph—striking, not in its quality but in its denotation—made me pay attention to the name of the place. It made me want to know the devastation that makes people see, but not live, in their homes.

Baga and Chibok are names once unknown, now made globally significant because of the level of terror that happened in them. But there are names that were not lucky enough to garner serious media attention, perhaps because our perception is that less violence was done in them. A quick search and some of these names pop up: Izghe, Gamboru, Potiskum, Doron-Baga, Bunduram… This is what our humanity has been reduced to: the assumption that one violence is less important than another. This is what the writer Emmanuel Iduma refers to as “numbness.”

In mapping violence we must first understand that humanity is our shared suffering. It is imperative to share in this burden called humanity. This is why Svetlana Alexievich wrote “Boys in Zinc.”

A possible question may be: Of what use is words against bombs in the hands of lunatics? My answer is unequivocal: Words persist, and it is on this persistence of words that we must leverage. It is strange that there is a form of intellectual complacency towards Boko Haram in Nigeria. It is strange that there is a dearth of essays and stories articulating in clear and urgent terms the desperation of a people ravaged by terror. Our over-reliance on mere reportage is why names, numbers, and places remain obscure. We forget that mapping violence is how we can learn to reduce its borders.

Glenna Gordon’s work on the Chibok girls and Emmanuel Iduma’s essay on The Mantle are brilliant maps of the terror that has engulfed Nigeria. But we need more. We need many. We must own our terror. We need to hear voices—unwavering from North to South—recording, naming and delineating. We need voices—unwavering­ from East to West—resisting, exposing, chronicling. Violence is continuous and therefore our mapping of it cannot for one moment be halted.

Yinka Elujoba is a Nigerian writer. His works have been published in Klorofyl Mag, Aerodromme and Saraba magazine. He lives in Lagos and sometimes in Ile-Ife.

Submit your work for the Saraba Manuscript Prize before December 15, 2015