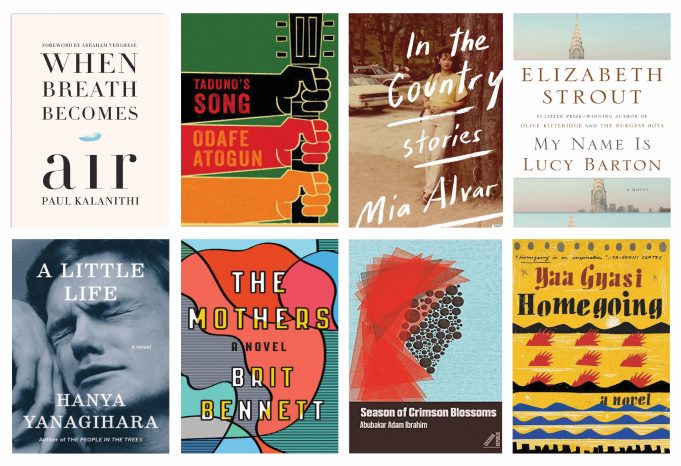 Early in 2016, the year began to shed its ability to stun me. The world was burning differently, a relentless blaze that licked up across continents, making me consume my news feed in smaller morsels. With each headline, the gap between satire and realism seemed to shrink even further. Never had I felt a stronger connection to Derek Walcott’s “In the Village,” where he writes: “I came up out of the subway and there were / people standing on the steps as if they knew / something I didn’t.”

If indeed we were at the end of the world, I would seek books with satisfying endings. If indeed there was little joy left on earth, I would read for nothing other than pleasure. I wanted to outwit a year that knew something I certainly didn’t.

And yet of all the books I read in 2016, Hanya Yanagihara’s hyper disturbing A Little Life moved me the most. I admired the depth of thought, the verve and the grit, the exquisite portrayal of friendship. I remembered what it means to hear a book breathing inside me. On certain pages, I gasped and looked away, unable to endure another moment of darkness. Still I carried on, day into night, because great literature can take you through fire and let you out reborn. Because I sensed, even before the last sentence, that I would think about A Little Life for a long while.

Paul Kalanithi’s When Breath Becomes Air became a balm of sorts. As it drew me into a meditation on mortality, so too did it immerse me in the healing power of art. I loved the language, a steady lyrical thrumming that felt like a poem in prose. The best memoirs are a masterpiece of trickery. You know how they will end, but they fool you into forgetting that you already knew what was coming. When Breath Becomes Air is one of those. I walked away with the air of someone who had witnessed a real, lived life.

Rarely does a novel lure me to reconsider my preference for realist fiction. Taduno’s Song by Odafe Atogun did so with its fabulist pitch. In this paean to Fela, a famous singer returns to his homeland and finds that nobody remembers him. What gives the novel its hypnotic lift is the lucid prose, which Atogun keeps in admirable rein, intensifying a near perfect ending. Throughout, the power of music and memory is by turns revelatory and evocative, but never phoney.

After a few slips, the superb short stories in Mia Alvar’s In the Country set my footing right. How deeply they all spoke to me. Class, colonialism and immigration are explored with emotional integrity. Home is a place with no redemptive twist. A cage opened in my chest — bliss of course, curbed by the anxiety that I might have missed a writer so attuned to my taste. A beloved story in the collection, “A Contract Overseas,” is a bath bomb of ironic truths. I sank in again and again, trusting myself to sit still.

Another writer in whose hands I’m at ease is Elizabeth Strout. My Name is Lucy Barton pulls off a masterful spin on the classic mother-daughter dynamic. The eponymous narrator’s interior world is fully realized, which is why I reject the notion that this is a ‘quiet’ novel. Lucy Barton doesn’t struggle to be heard. I listened without trying. I thought; I felt.

In Brit Bennett’s The Mothers, the protagonist Nadia has an abortion, a decision with far-reaching consequences on her, her best friend, and the father of the baby. Small town secrets converge in a bubble that could have been burst with a sensational prick. But Bennett is a gifted storyteller. She eschews sentimentality for soul, showiness for genuine emotional logic. The elegant writing alone would have been enough to charm me.

Not that other favourites fell short of magic. I enjoyed the bold dissection of middle-age female sexuality in Abubakar Adam Ibrahim’s Season of Crimson Blossoms. I cheered on the characters Binta and Reza. Their affair is sexy and fiery and wrenching, flush with warm humour. Here the personal and political unite in wonderfully sublime passages.

Two chapters into the novel Homegoing, I believed that I was home. I adored Yaa Gyasi’s epic tale of a family splintered by slavery. Each chapter focuses on a different descendant, assuming the scope of a novel-in-stories. There is despair, as expected; but there is light too, and it all turns spectacular when the novel doesn’t lose its forward-flowing momentum.

I recommended Homegoing with abiding zeal. Upon finishing the novel, a friend said she couldn’t bear to read another for fear it wouldn’t measure up. I made to mention a finely wrought tome, and then I let go. She would strike clear air soon enough, as I had weeks into my mission to outwit 2016, an inane idea if ever. Now, it was not so much about besting something I had no control over, but simply reading what I liked. The waves of the world roared on, and I stayed above saltwater, buoyed by books.