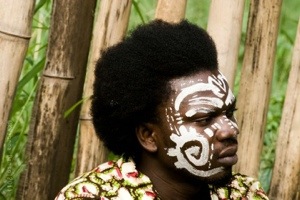 A ‘Heart’s Quest’ is a pocket-sized poetry collection divided into four chapters: Passion’s Truth, Awakenings, Soul Play, and Meditations. Each chapter contains a selection of poems that are soul-baring, and sometimes, mentally stimulating.

Reading ‘A Heart’s Quest’ is like being a judge in your own trial. There is a constant joust of ideas but none wins. It is a friendly exchange of fire with oneself; a spiritual journey. Readers will find it easy to relate to most of the feelings and thoughts expressed in the book. Doubts and despair clothes some poems while comforting knowledge reigns in others. There is an ever-present movement towards God to attain an all elusive oneness with the Divine Being. It is this constant pursuit of man’s relationship with God that builds the interpretive plane on which most of the poems are moulded.
Elipklim Akorli has chosen the medium of poetry as a channel for mystical meditations on the nature of us, everything around us, and our relations. It illumines our physical selves and captures our souls in its quest of meanings which are communicated openly in an easy and conversational tone – low in voice, cajoling, but firm in conviction. You could call these poems ‘seeds of intellect’, brimming with hope but not hardnosed like philosophical discourses. The volume is heavily influenced by ‘spoken word’ and is best judged on content, rather than invectiveness. It does not present fresh threads of experimentation, neither are the themes – which are old as the mysticisms of the ancients.

The first chapter contains ten poems, each dealing with a different perspective of love. Each invites to a new house of experience. Each satisfies its place in the anthology. There is a call for oneness, a reflection of visions and a parade of life’s treasures.

The anthology begins with ‘The Eternal Smile’; an introduction into the very nature of the poet. You are invited to a meal with warm hands. The tone is playful: “I first did not want to write of this/But let me just share it with you”, and the style mimics the ways of a child that has just learnt how to walk. It opens the door for a much serious digression into the “Mystery of Love”. Love is simple/yet it has depth, he says. It is the seat of mystery itself. Love is a churned mystery/One that can only discover itself.

Poetry is love’s other name and it’s not surprising that the poet explores its nature and links to happiness. Let love do what it has to do, let it fulfil its existence.

There is advice to those willing to abide by the poets message. He says: A friend once sang a song to me/For you to know this love/You have to throw a ray of light at me. He counsels that in the midst of change, whilst new patterns appear, we should cling not unto the old.

The second chapter: “Awakenings”, has 15 poems. To walk through a few, The “Golden Dawn” and “Lightbearers” are paths of self-realization. It is a slow walk towards sanctifying our thoughts, preparing ourselves to the beginning of a new epoch, that we may access the language of the heart, of self identity, of love and being. It is only then that we can share in the universal truth.

“Still I Rise” is bubbly, akin to a child holding crayons for the first time. The style is relaxed, the texture is simple, but some lines are prosy and betray the poet’s maturity as a master weaver. They are weakly structured and contain nothing new apart from the poet’s exuberance. Read:

Sometimes I feel like writing just for the fun of it
Yes when I do, I express the passions of truth
It is really an amazing feeling
It is a way I communicate with my self
And the world at large; although I feel a lot
has been communicated already
My voice would only complement it
and that is not a bad feeling at all
(Still I Rise, p. 48)

“Altered State of Consciousness” is dianoetic in essence, but it does not neatly align with existing discourses of altered states of consciousness as currently understood within the field of psychology. This wide digression pours cold water on the objective value of the poem as a medium of understanding. The poet does not pull us to the state. We are left hanging on the edge of words, unable to wade deep into the very state being portrayed. However, such poetic projection is permissible. It is the artist’s joy at contemplating the hurly-burly confusion of life that swallows up any attempt of history to impose meaning on it.

“Soul Play” is the third chapter and contains nine poems. ‘All That We Are’ is a tribute to words and its ability to preserve meaning: When words become clear/And you can see words/Instead of understanding/You will know all that we are. ‘An Ode to the God of Poetry’, as the title suggests, elevates the poet to God status, where he speaks in thunder and lightning, in the vocal language of mystery. Other poems in the chapter are ‘Chords of Death’ and ‘Reflections’. My personal favourite is ‘Music in the Strings of Love’.

Look at them, yes, heroes they are
They play on the tightened strings of love with eyes wide open,
Eyes that can no longer close
(Music in the Strings of Love, p. 117)

The last chapter is “Meditations” and it details personal growth. There are stories in these poems; narratives show the poet’s gift as a story teller, and his ability to share the fabric of verse through sound. They are poems that beg to be read aloud to be appreciated. They are an ‘Appreciation’ of the daily milestones that the poet has made in his search for inner peace and understanding.

“Dress Code” repels conventionalism. Its attitude is rebellious, its tone garrulous, and its message is an arrow shot of defiance. It is a warning to anyone who will dare to stand on the poet’s path of progress. Be warned, is the loud cry. This poem reminds one of earlier entries: ‘Independence Through My Left Eye’ and ‘Time to Liberate My People’ which are the only poems that talk about the political situation in Ghana. The first is a lament of the death patriotism and lack of imagination in the political affairs of the country. ‘Time to Liberate My People’ advertises the Saviour aspirations of poetry; the eternal cry of importance that all poets wish.

As if tired after a long journey, the book subsides into a murmur. The walk towards the end is one of introspection, and in this plane, the poet calls on the powers of music to oil the soul. ‘Music of the Night’ begins on a tired note: I have been writing for some time now/ …I know I have written of the golden dawn/ … I know I have woven so many thoughts intriguing/ … I hope you were able to tune to the heavy chords of the music of the night. ‘The Mystery of Music’ and ‘Peace in Surrender’ pull the anthology’s door to a close. Contemplate this love with me; the harmony of life, is the poet’s request to the readers.

Buy ‘A Heart’s Quest’ and drown in its meditative bath.

_ _
The Reviewer: Richard Oduor is a poet, critic and budding writer. He is a holder of a Bachelor of Science Degree in Biomedical Science and Technology, Egerton University. He works as a Research Consultant and lives in Nairobi, Kenya. His first poetry collection is with the publisher. He is also working on a novel and a number of short stories. He also runs Grand Debate where he posts regularly on anything worth writing about.

The Author: Elikplim Akorli is a Ghananian Poet. He was born at the Battor Catholic Hospital in the Volta Region. As a child, he enjoyed fishing and picking wild fruits in the forests, while experiencing the mysteries of the elements. He also enjoyed swimming in the Volta in the evenings, loved star gazing and tried counting them as a child. He enjoyed the Hogbetsotso festival and traditional dances.

After spending seven years of his childhood education in the Volta region, he relocated to the Accra with his family to continue his primary education at Pig Farm 1&2 primary and later moved to Providence Preparatory School. He pursued his secondary education at Mawuli School and proceeded to the University of Cape Coast where he graduated with a Bachelor of Arts Degree in African Studies as a major, Classics, Philosophy and History. ‘A Heart’s Quest’ is his first poetry collection.