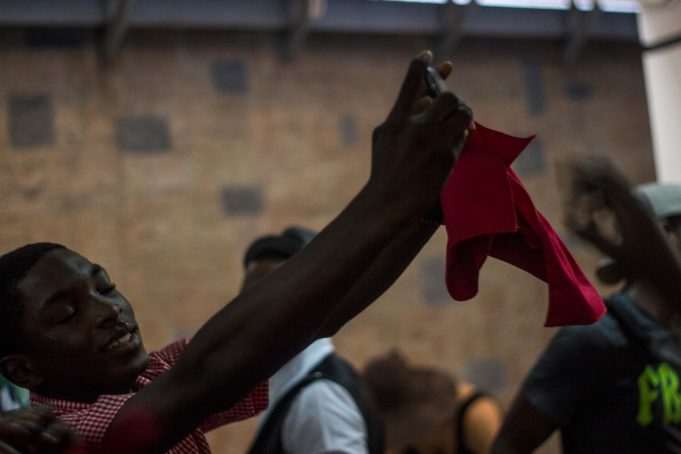 She met him at a makeshift healing centre not far from a wrecked village. He had been wounded from the war against the machines and that was good enough reason. He said her eyes were his reason.

He refused to be discharged after the metal bits had been removed from his leg. Rumour had it that some people were rebuilding the village and settling in. Could they find a place together? At least until some sort of government was set up. These were not the times to live alone. She smiled at her tray of needles and said yes. But he would do all the building and repairs. She would try to remember how to cook. The last time she cooked had been before the war.

After a war where all you loved was taken away you unlearned how to love. You learned how to detach from fond memories. Unless you wanted to kill yourself. She was a coward and could not do that. She survived a war without knowing why at the end of it. Then he came into the centre with his blue eyes. His eyes had been altered for night vision by some tech kid in what used to be India. He said he used to be Nigerian. She said she used to be Ghanaian. It was the first time she was admitting out loud that the world as she knew it had ended.

They took off at night and the ruins led them to the village. This was how they navigated the aftermath of war, destruction always led home. The good buildings had all been occupied but they found a compound of huts at the fringe of the village, square and circular. Most of them had been torn down by the faceless machines. No organization or nation had claimed responsibility for the actions of the machines. Nobody saw them. Just the fire and bullets they spat from the sky. And their charred remains when they were shot down.

He used some of these remains to cover the gaps in the wall of the hut they were going to sleep in on the first night. They lay on the bare earthen floor and gazed at the stars through the open roof till sleep came. Someone once told her that visible stars had died eons ago, long before their lights reached the earth. Now, she wondered if in constellations above, the last six years had not happened. If somewhere in the consciousness of those stars she was still a little girl on her way to the National Assembly for school excursion.

He continued fixing the compound the next day. He used his blue eyes to check for radioactivity. He tried to fix the pit latrine but it was filled with rotten bodies. They had probably been hiding here during the heat scourge. In the third year of the war, machines that could identify heat signature arrived and everyone had gone into hiding. Almost all animal life went extinct by the end of that year.

She urged him to hurry. In four months, all humans would be disconnected from the wireless metabolism satellite. During the war, when machines destroyed all food and fauna on earth, organisations that had managed to survive provided metabots that connected humans to the metabolism satellite. They would need a kitchen now that the satellite was going to be shut down.

By the end of the first month of their cohabitation, he had already gone halfway into preparations for their disconnect; he had found some salt and large metal scrap parts and a plastic bowl to perform electrolysis that would generate electricity for them to cook with or just light up the place. He had turned the latrine into a kitchen and discovered moisture on the walls of an abandoned well at the back of the house. Then he went ahead to expand the bottom of the well with plain blunt metal parts that served as a spade and planted all the seeds he had been gathering on his path of war round the world. A Qat shrub from Yemen. Hazel nuts from America. She was terrified when he spilled them out of his front pocket, she could not handle the unpredictable. Yes, spontaneous used to be exciting, until machines came out of the sky. He apologised for keeping his seeds secret from her. But he could understand, the war had left everyone on the edge. She could forgive and understand that this was his way of doing things, he had been a loner throughout the war, but forget? No, she could not forget.

As the weeks to deactivation drew close, the more desperate whatever it was they shared became. He was the one who brought up the ridiculous idea of marriage. She didn’t see the point of an apocalyptic union but she wanted them to move into a proper compound that had other people. No one had seen them together. He preferred the solitude here. He talked too much, she said, for someone who cherished solitude. She was too cold he said, for someone who cherished the company of others. For a moment no one spoke. He got the sensation of treading thin ice. Then she threw her head back and laughed. He chuckled a little, breaking sweat all over. He walked close to her to watch the wonder of a girl’s laugh. It was out of place in their world, this manner of laughter.

She followed him down the well that afternoon to see the growing plants. Every plant had germinated, the dwarf mango already producing fruits that would be ripe by the week of deactivation. The yam tendrils snaked to the wall and crept up, feeling for sunlight while peppers and tomatoes glowed red. She fondled the leaves with the tips of her finger and smiled at him. She plucked a tomato and fed it to him. I know you won’t taste it and it won’t do anything in your body, she said when he resisted. Just feel the flesh on your tongue. She showed him the rest of her flesh that night, after they both said a quick prayer to God just in case He was still there.

The next morning she woke up to find him with a metal scrap in his hand, poised to strike a bird perched at the mouth of the well outside. He wasn’t even wearing his clothes. She came from behind him and embraced his taut body, truly happy. She felt his muscles tense, then relax. Do you even know what day it is? Leave the bird alone. But it’s a vulture, he said without looking back, an ugly thing. We can have it for dinner. You know how rare meat is.

It’s a pretty bird, she said, turning him to her. For you, he said and walked to the door. She laughed, picking up his jacket on the ground. A black box the size of a palm and face of glass fell out from a pocket. He knew the rules. No human was allowed to use any electronic device; the only electronic device the machines had not hacked was the human brain. With mobile phones, televisions, personal computers and home appliances they had wiped out 73 million people. The only way he could be alive with a phone was if-

She let it go and smiled at him as he shooed off the vulture and disappeared into the well. She was new to the trust thing. She pressed the forgotten jacket to her chest for strength. He came out from the well with everything they would need to create some semblance of a meal. They laughed over the failed culinary experiments and soon found themselves on the plastic cement floor of the kitchen in a mess of over-boiled yam pulp. By evening however, she had mastered the electrolysis cooking system he created. This was possible only because she chased him out of the kitchen. He stumbled out giggling when she had to resort to tickling. He distracted himself from distracting her by cleaning her ankara print wrapper and his coat for dinner. When the moon was at the centre of the sky she brought the food served on washed metal scraps and he brought their clothes. They dined with only moonlight for illumination, the partial darkness heightening their senses of taste as the protective numbness the metabots had caused wore from their tongues. Mashed yam. Crushed roasted groundnuts. Pepper and garlic sauce. First they tasted saliva. Then their door was smashed in and five men in war armour circled them. They came in peace they said from their glass masks, why weren’t the two of them wearing any? Gas masks were required to adjust to the surrounding oxygen since the metabolism satellite had been deactivated. He explained that they were not aware of that instruction; they had not left their compound since they moved in. The ex-soldier who had been speaking nodded. The movement almost disturbed the thatch roof.

New information had been discovered he bellowed through his mask; a human or a set of humans, probably environmental care fanatics, were responsible for the control of the machines. A team of scientists and programmers had cracked the code of the computer virus program that had overridden all telecommunication systems, and it was revealed that it was man made, not even an artificial intelligence, else it wouldn’t have been crackable. Had they noticed any strange behaviour in any one since the war started? Suspects would be those more adjusted to the situation, those with solutions and lack of anxiety or fear. They might have preserved some things from before the war, maybe painting or leaves. Those extremely knowledgeable in post-war survival. They must have spent years in training for it.

He shook his head and said no. The men turned to her and repeated their question. Bile rose to her throat. The phone, she said. What? He asked, taking her arm and rubbing gently. She returned his gaze. The phone. The seeds. The electrolysis. He screamed as the men electrocuted him to submission, the bluish light illuminating her face as she stared at the food in calm. He begged her to talk to them, to say something as they chained him and dragged him away. She leaned on the door and stared at the moon instead, a hand on her stomach. On a full moon like this years ago, her mother had showed her the face of Mother Mary leaning over Baby Jesus.

Keep reading from our Transitions issue, available on Okadabooks.