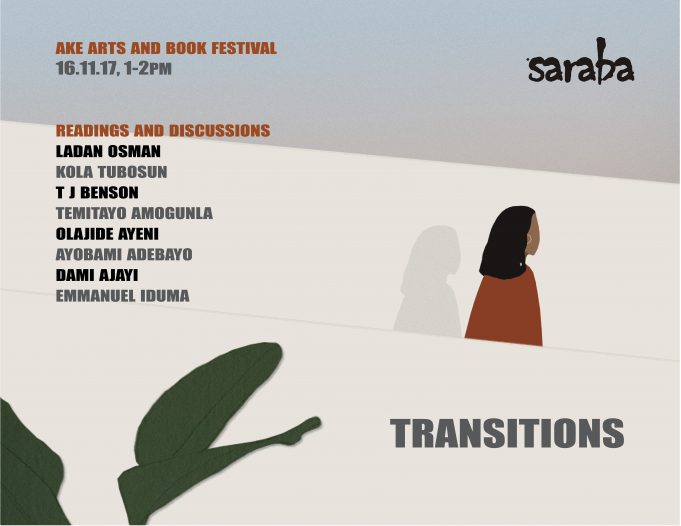 Join us for the first presentation of our new issue in Nigeria, at the Ake Arts and Book Festival.

As our publication evolves from its online presence to one in physical form, this event marks the Nigerian launch of our first print issue, “Transitions.” The featured writers and visual artists explore the theme of transitions through questions of time, movement, and exchange, among others.

Ladan Osman’s work is a lyric and exegetic response to problems of race, gender, displacement, and colonialism. She is the author of The Kitchen-Dweller’s Testimony (2015), winner of a Sillerman First Book Prize. Her writing, photos, and collaborations appear in a variety of journals. Osman lives in Brooklyn.

Kola Tubosun is a Nigerian linguist, writer, editor, and teacher. His work spans the fields of education, technology, literature, journalism, and linguistics. He is a Fulbright Fellow (Southern Illinois University Edwardsville, 2009) and recipient of the Premio Ostana Special Prize for Mother Tongue Literature (Cuneo Italy, 2016).

Temitayo Olofinlua is an award-winning essayist who has completed writing assignments for various organisations such as Global Press Institute, Mania Magazine, Saraba Magazine and Facebook, to mention a few. Her work has been featured in various publications, online and in print. Some of her writing awards include Finalist, African Story Challenge, Technology and Business Cycle (2014);  Second Prize, Peter Drucker Challenge (Manager’s Category), (2014); and First Prize Winner, NEPAD Essay Contest (2013). She lives in Ibadan where she is also a PhD student at the Institute of African Studies, University of Ibadan.

Ọlájídé Ayẹni is an architecture and documentary photographer with interests in cultural psychology and indigenous languages. A graduate of architecture, he seeks to highlight the oft unnoticed in the urbanist landscape of Nigeria. He is currently working on the subject of urban decay and its relation to time. Ayeni resides in Ikorodu, Lagos.

Ayọbámi Adébáyọ’s stories have appeared in a number of magazines and anthologies, and one was highly commended in the 2009 Commonwealth short story competition. She holds BA and MA degrees in Literature in English from Obafemi Awolowo University, Ife and has worked as an editor for Saraba Magazine since 2009. She also has an MA in Creative Writing from the University of East Anglia where she was awarded an international bursary for creative writing. Ayobami has received fellowships and residencies from Ledig House, Sinthian Cultural Centre, Hedgebrook, Ox-bow School of Arts, Ebedi Hills and Siena Art Institute. She was born in Lagos, Nigeria.

Emmanuel Iduma, born and raised in Nigeria, is the author of The Sound of Things to Come. He co-edited Gambit: Newer African Writing. His essays on art and photography have been published widely. He is editor of Saraba Magazine, and a faculty member of the MFA Art Writing program at the School of Visual Arts, New York. His travelogue, A Stranger’s Pose, is forthcoming in 2018.

Dami Ajayi is a poet, essayist, music critic, digital publisher and medical doctor. His debut book of poems, Clinical Blues (2014) was nominated for Association of Nigerian Authors Poetry Prize (2015), and shortlisted for the Melita Hume Prize. His second book of poems, A Woman’s Body is a Country has just been published.