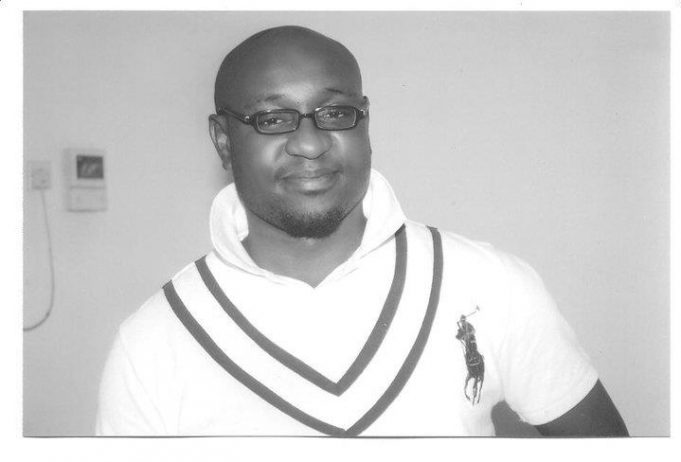 In the year of the defeat of incumbency and the ascendancy of a transmogrified former military ruler, Peter Akinlabi has placed in our hands another weapon against the usurpers of silence.

His chapbook, A Pagan Place, published by Akashic Books― an imprint of Kwame Dawes’ African Poetry Book Club―weighs in at 46pages. Fifteen poems like unleavened bread sprawl across the pages, awaiting communion with any reader who might prefer silence to noise, the earth to the sky, poignancy to catharsis.

In “A Brief History of My Stutter,” the first in the collection, we glimpse the shadow of the form to come. Perhaps the most eloquent of the chapbook and the most contrived, we encounter in neat cadences the cartography of the poet’s vocal archipelago:

The stutter, however, returns in subsequent poems and heightens the capturing of the imagination― visual and aural. The slant verse, the punctuations that proclaim the flight of thought, and the vertiginous enjambments add to this effect. The stutterer’s anxiety is absent; in its place is a learned and perhaps expedient concision, distilled in laconic verse, elegant yet understated.

One could name influences, to claim or shame them. One could name-drop from Okigbo to Heaney, to Osundare, and to Soyinka. But that is not what this is about. This is poetry of its own merit. Not dependent on any knowledge of the writer, his quirks, what he drinks or smokes. Disinterested.

There is the telescoping of metaphors. This is writing in geometric progression. Metaphors illuminating metaphors in a dizzying journey into a maze of symbols. Metonyms do not stray too far from the universe from which they were stripped:

The moon,
sitting on the face
through the open sky,
seems misplaced,

Something had reversed the geometry
of the sprawl.
—“A Strophe for The Body (III)” pg. 26

This chapbook is obsessed with memory and its agencies. Is it a place or a person? A way of see-ing or be-ing? Is it a function exercised or an essence that cannot be pulped? What physicists have warped in cryptic equations and neurobiologists have chased from films to slides, Akinlabi rationalizes into two roots in ‘An Old Poet Considers Fading’ Images:

Lights have singed
braver lives, he thinks, setting sadness to sail
like conquest―

And all memory is an imminent
coupling of debt
and derailment.

These roots subsequently ramify in the reader’s mind, illuminating but unrevealing. Tributes are paid to Place and Persons:

I remember the merchant women of Takoradi,
the pagan cadences of their names;
I sheltered my own on the ease
of open waters.
—“Return to Takoradi,” pg. 18

The restless spirit of the poet charts derailment from the ancient Yoruba legend of Oshun, to the Greek myth of Oedipus, and to the present day carnage in cities as far-flung as Jos and Benghazi. The sense of rootedness to geography is pervasive, and the theme is considered on both sides of the Equator and the Meridian: from Barkin Ladi in Nigeria to Takoradi in Ghana, from Benghazi in Libya to Kinshasha in Congo, Akinlabi interrogates the variables of memory and their rationalization.

The shuffling of time as an agency of immortality is seen in the mirroring of the ancients by the contemporary and the shifting of compasses between innocence and modernity:

Yet, this is still not a mock landscape
any more than the hypothesis of
the mind’s past continuous…
—“Oyo,” pg. 34

I shuffle time still,
a bird of omens, heavy with
an unnameable conveyance, loitering
on the ledge of its dire knowledge.
—Oedipus’s Will, pg. 37

The insinuation of the poet’s subliminal fixation on remembrance into the most tangential line or verse is what gives these poems an almost cryptic allure. One feels as if one is eavesdropping on Mount Olympus where deities wager and “disquisition.” One could justify a misreading of any poem by the fact that it fits perfectly in the cosmology of “Debt and Derailment.”

In an era of the plenitude of doggerels and impostors, A Pagan Place is indeed “the ventriloquist’s most weaving act.”