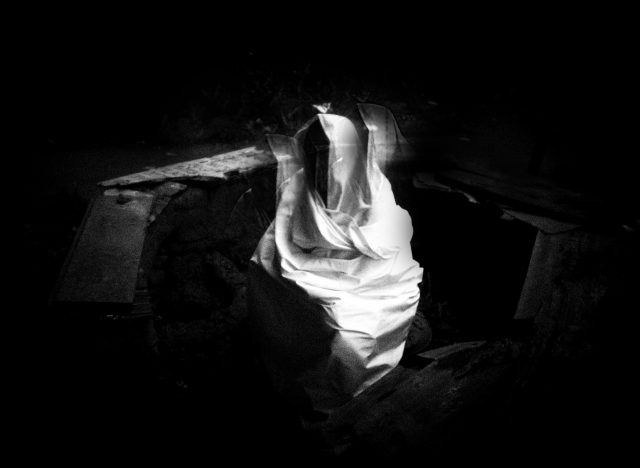 Photograph by Ayo Akinyemi, from the series Afterlife.

What’s all the fuss and flurry about Christmas, I wondered as I drank my fourth glass of red wine. Most of the guests were dressed in different forms of white attires; the hall looked like an assembly of celestial bodies.

The Christmas party was Ginika’s idea. I would have probably been in my flat binge-watching on Netflix with some green bottles, maybe Heineken or Star Radler, for company. The DJ was playing a mashup of Highlife and Afrobeat, as the heavy aromas of food tickled the nose. Jollof rice, egusi soup, roasted chicken, grilled fish, fufu, efo riro, all trying to sell their irresistible appeal to the guests who stood in clusters chattering and laughing at dull jokes.

Amongst all the food on the menu, it was the tilapia pepper soup I enjoyed the most. I was still talking to a waiter about a second serving when Ginika called out to me. Standing beside her was a dark young man, who was bespectacled and draped in a black tuxedo.

“We are presently working on an ad campaign set to launch in March next year.”

“Hi Kate,” said Ikenna, smiling shyly as I took his outstretched hand. His handshake lingered on for a few seconds. Most people hardly wanted to shake hands with me. Even when they did, it was always abrupt as if taking precaution against an infection.

My skin is a curse in disguise, so I thought. As a child of five, my classmates found it funny that some parts of my arms and legs had streaks of discoloured patches. Some resembling animated characters while others took the shape of objects forming the verses of nursery rhymes.

Most of my classmates were fascinated by the white artwork growing on my body, even extending to my face. I was also fascinated, always asking my mother questions about the tapestry on my body, until her lips hurt from answering me. Yet I did not understand anything of what she said.

As I grew older, the patches grew bolder on me. The patches grew faster than I was able to comprehend the biological mechanism underlying its process of dispersing itself symmetrically, on my skin.

To stop people from staring at me in public, I adopted a dress code of wearing long-sleeved clothing, denim trousers, long gowns and sometimes turtleneck blouses. Even when the weather was hot, I religiously stayed true to my adopted dress codes, the consequence of which was the discomfort from stinging dampness.

By the time I was twenty years old, the patches had expanded, engraving themselves on my left eyelid, nose, lips, right ear and a portion of my hair. I could no longer hide it from the world.

I was fifteen years old when I first heard the word, Vitiligo. It was my first visit to the dermatologist, Dr Preye. The word did not sound English to me and I wondered from which language it came.

After pausing to answer a call, Dr. Preye continued his dour explanation of my skin condition in a slow voice, measured pace, painstakingly explaining the devastations of this skin monster. Vitiligo occurs when the melanin-producing cells die or stop functioning. As a result, the rate of colour loss is unpredictable. It affects people of all skin types but it is more evident in people with darker skin tone.

Then he went further to highlight some symptoms of vitiligo. Of the five symptoms he mentioned, I already had three. These are patchy loss of skin colour, loss of colour in the tissues that line the mouth and nose and diminutive premature whitening of hair on the scalp, eyebrows and eyelashes.

“Kate, you have the most common type of vitiligo called generalized vitiligo,” noted Dr. Preye. “The discolored patches often grow symmetrically on many parts of the body. Others are segmental and focal vitiligo, they occur on only one side or part of the body.” I waited to hear more and it came. “The good news,” said Dr. Preye almost with elation, “is that vitiligo is not contagious.” He offered this last piece of information with a smile, apparently expecting that this bit of information would animate my sullen mood.

But there was nothing good about the news to me. It was good news for the people who believed I had a plague. The people who sat inches away from me at church, leaving me in doubt about whether the love of God really reigned in their discriminatory hearts.

But what broke my heart as I left the dermatologist’s consulting room with my mother were two grave statements that concluded his cheery chatter about treatment options.

The cause of vitiligo is typically unknown. There is no known cure for vitiligo.

Some of the treatment options he recommended were sunscreen, makeup, steroid creams, phototherapy to darken the white patches and de-pigmentation. These options offered little or no hope. I cried profusely on our way home. My mother urged me to look on the brighter side but I did not want to be comforted.

“What brighter side?” I later asked myself. What I saw was a murkier shadow of myself and society defining me by the discolouration on my skin rather than the content of my character.

I spent most part of my 20s feeling depressed and insecure, questioning why I was the unfortunate one to have this condition amongst two brothers and one sister. Besides having vitiligo, acnes and black heads dotted the “not-really discoloured parts” of my face, crushing any trace of self-confidence left in me.

Individuals have a profound relationship with their skin, I observed. Men and women. Young and old. The skin is designed in different fabrics which ranges from oily, dry, combination, normal and sensitive much of which falls under what many consider as “normal.”

I cried when I saw a lady with vitiligo in a CoverGirl campaign; I never imagined I would witness such a day. Amy Dean, the CoverGirl for a new foundation uses two shades to highlight her hypopigmentation caused by vitiligo.

I am learning every day to be my own body’s positive hero and embrace exactly who I am. My childhood dream of becoming a model was not unrealizable after all, with positive examples like Winne Harlow who was always slaying on camera and advocating for people to choose to stand out instead of trying to blend in. This is the woman I was becoming just before Ginika’s Christmas party. Before then, I would have melted in my shoes, on being introduced to a striking man such as Ikenna. I would have taken the glint I saw in his eyes for a sparkle of desire. I wouldn’t have hesitated to exchange phone contacts with him because it felt cathartic to be desired, even if being desired meant a few weeks of sexual affair and long stretches of heartbreak from being dumped only to repeat the cycle all over.